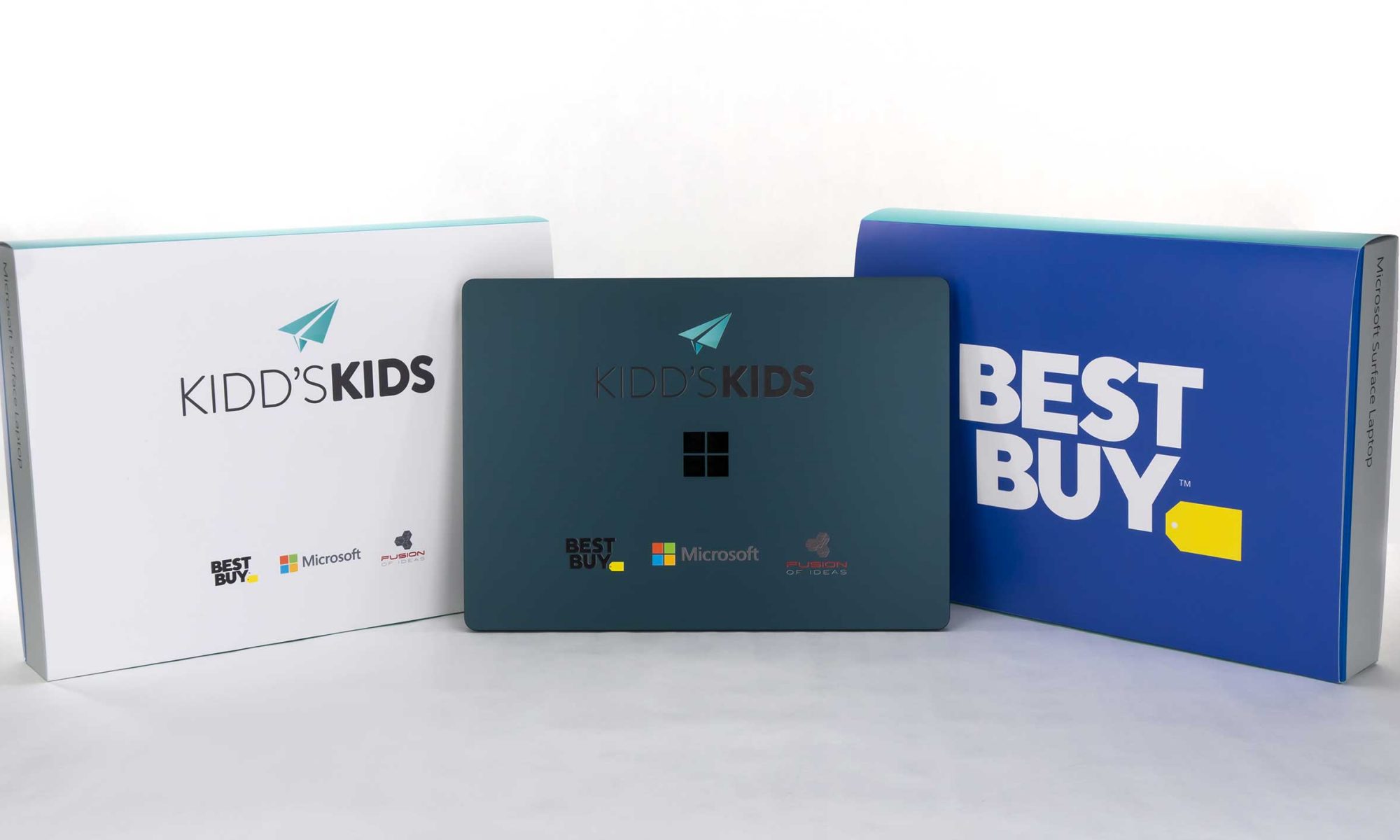 For more than 25 years, Kidd’s Kids has taken children with life-threatening and life-altering conditions and their families on an all-expense-paid trip to Walt Disney World in Orlando, Florida.

For the ninth consecutive year, FUSION OF IDEAS has gratefully donated our app development and customization services to this amazing cause. Together with Best Buy and Microsoft, we provided and personally handed out customized Microsoft Surface laptops to each Kidd’s Kids family. Each laptop was personalized with trip information preloaded in the devices.

The gift of technology is an impactful one for the families. The children use these devices for schoolwork as well as entertainment when they are in the hospital, and for some, who are nonverbal, technology devices are valuable communication tools.

Thanks to @bestbuy for hooking up all of the @kiddskids with @surface laptops!!! Sweet!

More than 1,300 attendees at the annual Attollo fundraising event in Lancaster, Penn., celebrated a group of 60 high school program scholars for being accepted into colleges across the country. Also highlighting the event, Magic: An Attollo Experience, was a keynote by NBA Hall of Famer, Magic Johnson.

This year’s celebratory fundraiser raised $1.5 million benefitting the Attollo program. Founded by the Children Deserve a Chance Foundation, Attollo is a college access/leadership program in Central Pennsylvania that supports youth from underrepresented communities in their pursuit of academic achievement, empowerment and social engagement.

As a token of appreciation to the event sponsors and donors, Attollo partnered with FUSION OF IDEAS to create custom-branded Apple AirPods as gifts. The device included the program’s name and logo printed on the case and on the stems of the headsets. The AirPods box is outfitted with a fitted custom device sleeve that has a photo of Magic Johnson.

One event donor shared anonymously, “You [Attollo] always inspire students to push beyond their comfort zones and do more than they thought possible. I am not quick to try new technology, but when I received these AirPods, I decided to push myself beyond my comfort zone and try them. My grandchildren were so impressed when I came walking in with my AirPods! I can listen to my audiobooks and my old favorite songs.”

Like many cystic fibrosis patients, Richard Fusco spent most of his life in the hospital. In the last three years of life when his health started deteriorating, Fusco depended on an iPad to communicate with his family, stay in touch with friends, and keep himself entertained with movies, books, videos and games.

Fusco’s father, Ralph Fusco, saw how this multifaceted mobile device enhanced the last few years of his son’s life and was inspired to provide the same opportunity with technology to other cystic fibrosis patients. This was the beginning of The Richard S. Fusco Foundation.

The mission of the Foundation is to help children with cystic fibrosis stay connected with loved ones and school through mobile technology. Since it was founded in 2013, the Foundation has formed partnerships with six children’s hospitals across the country to give iPads to their young cystic fibrosis patients.

Inspired by his son’s zest for life and positive attitude, Fusco partnered with FUSION OF IDEAS to design a vibrant image for the iPad Smart Cover and a second image for the device sleeve. Prior to each delivery of iPads, the images are printed and packaged up to create a surprise and delight moment upon receiving the device.

FUSION OF IDEAS also uses its proprietary laser etching process to customize the device itself with the Foundation’s name on the back.

“It is pleasure doing business with FUSION OF IDEAS to produce these colorful covers and packages for the iPads that we hand out,” said Ralph Fusco, founder of The Richard S. Fusco Foundation. “More than just a beautiful package, it is a memorable experience for the children when they open the devices for the first time. The joy we see in their faces and the appreciation by their families is what keeps us going, and we hope to provide that experience to young cystic fibrosis patients nationwide.”

For more information about The Richard Fusco Foundation, visit https://www.richardsfuscofoundation.org/ 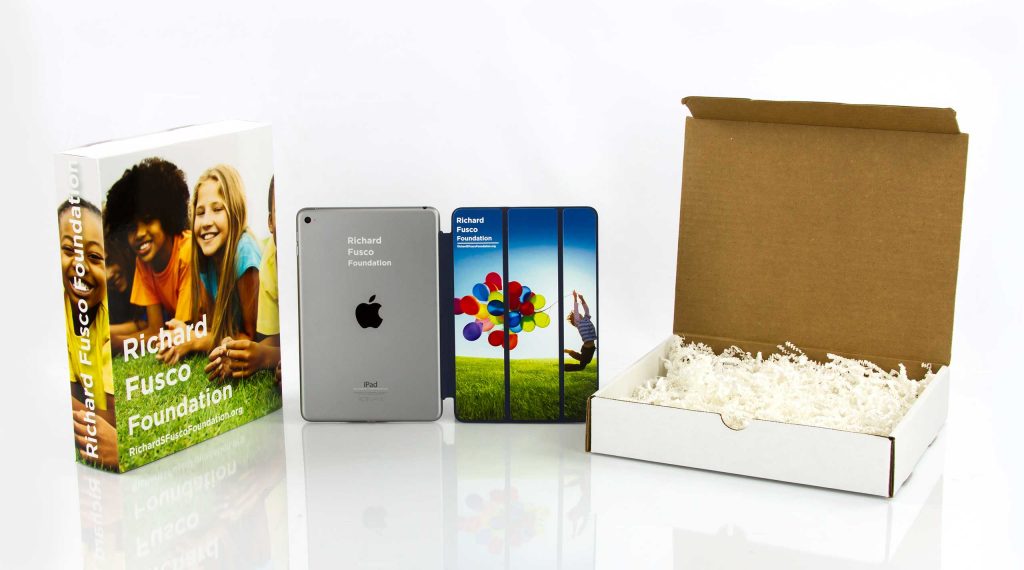 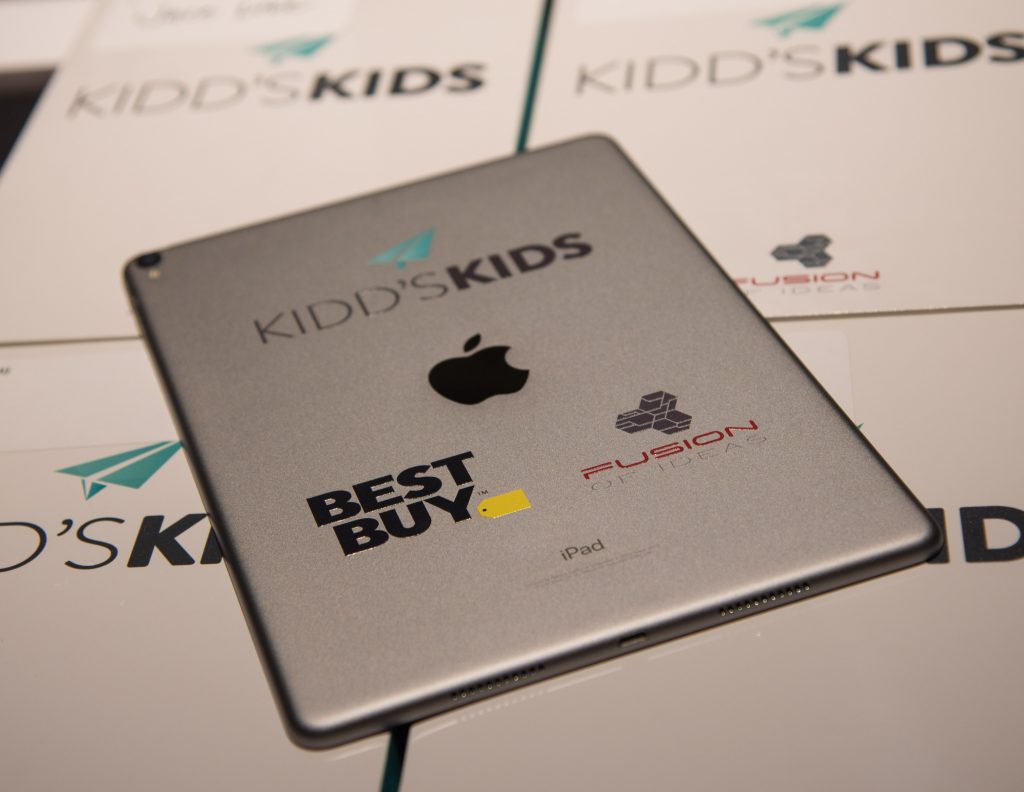 “My daughter is nonverbal and she finally has a device where we can download the app that helps her communicate with us at home. It’s the biggest blessing and an amazing gift! People take their spoken language for granted and do not realize just how hard it is for a nonverbal child. This iPad can break those verbal barriers for our family!”

These were the words from a family member of one of 57 kids who went on the Kidd’s Kids 2018 trip to Walt Disney World in Orlando, Fla. Founded by late radio host and television personality, Kidd Kraddick, Kidd’s Kids provides hope and happiness by creating beautiful memories for families of children with life-altering and life-threatening conditions.

Every November, the organization sponsors a group of children and their families on an all-expense paid trip to “The Happiest Place on Earth,” where they can forget about doctor appointments and their illnesses, and enjoy a magical day with their families.

At the start of this once-in-a-lifetime trip, the kids were gifted with a personalized Apple iPad that is preloaded with all relevant and contact information for their trip.

Here are the words from another family:

“We were so grateful to have the iPad for my son’s 11-day hospital stay. He loves being able to keep in touch with family and friends using the FB Kids Messenger app. He also likes it for drawing, watching shows and playing games.”

This is the eighth year that FUSION OF IDEAS has gratefully donated our app development and customization services to this amazing cause. Together with Best Buy, we were onsite to help hand out the iPads to the kids, and see the delight on their faces when they were presented with the customized devices.

“The donation of the iPads from Best Buy and completely personalized by FUSION OF IDEAS provides entertainment, educational tools and memory-making apps the Kidd’s Kids otherwise would not have,” said Kelly Kemp, executive director of Kidd’s Kids. “We know how grateful all the kids are especially when they are back in the hospitals for days or weeks at a time. It’s a blessing and a partnership we are so very grateful to have for our Kidd’s Kids.”

For more photos from this year’s Kidd’s Kids trip, check out their album on Facebook.