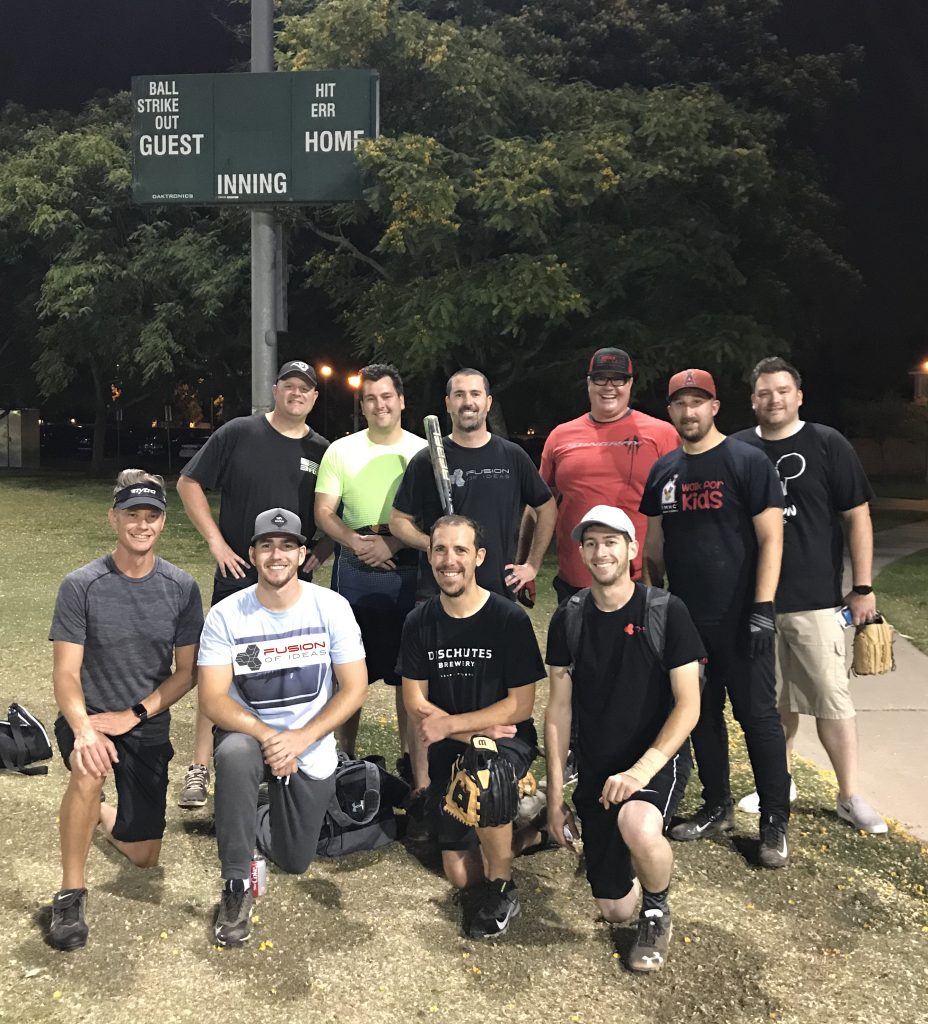 If there’s one thing that unites all of us here at Fusion of Ideas, it’s good, healthy competition. Over the years, we’ve held countless games and competitions at our office in Lake Forest, and occasionally offsite. To name just a few: Mario Kart, foosball, Guitar Hero, golf, scavenger hunts, escape rooms, ping pong, Pogs (remember Pogs?), and our annual Office Olympics, which consists of seven separate competitive events. Take any activity, pit teams or individuals against each other, and you have a successful Fusion event.

So it should come as no surprise that a few years ago, many of our team members were hungry for more. Waivers were signed, a roster was assembled, and in 2014, the Fusion of Ideas team played its debut season of softball with the Irvine Athletic Department. To put it mildly, the competition was a bit tougher than anticipated. But our team soldiered on, savoring even the faintest taste of victory each time we reached a base, scored a run, or fielded a hard-hit grounder. “It’s rough out there,” said Director of Operations and starting pitcher Andrew Nielson. “Somehow, our opponents have been able to hit right through the gaps in our defense. We’ve been working on finding the right configuration of outfielders, tightening up our infield, making the easy outs on defense in general, and having more productive at-bats on offense.” When asked whether he’s optimistic for improvement in future seasons, Nielson said he was still hopeful.

You probably can’t help but think of the obvious parallels between this scrappy team and the 2002 Oakland Athletics in the movie Moneyball. Piecing together runs using a sabermetrics approach, as illustrated in the movie, has proven much more successful for Fusion than swinging for the fences. It takes patience and experience to recognize that bases on balls, smart base-running and well placed soft hits can be highly effective at manufacturing runs and creating momentum. But even this approach takes time to cultivate. The Fusion of Ideas softball team recently completed its fifth season. There were highs and lows, great games and not-so-great games, but never an absence of good sportsmanship and fun (for the most part). Everyone loves an underdog, and our team plays that role to a T. Here’s hoping the 2019 season is our best one yet.